Friday Five: The Four Agreements (+ One)

I love a classic: Jackie O. and her sunglasses, ordering anything cherry-flavored, and of course a classic novel like The Great Gatsby. On this Friday, one of the first of the school year, my thoughts move away from the works of classic fiction to a classic work of nonfiction: Don Miguel Ruiz’s Four Agreements: A Practical Guide to Personal Freedom. This book was the first book my teaching partner and I had yearlong interns read before starting their student teaching this fall  at our high school. Our hope is that the timeless and universal wisdom present in Ruiz’s guide would set them up for success in the classroom with their mentor and their students.

But as inservice progressed and new administrative changes appeared and I endure meeting after meeting with outraged colleagues, I felt the urge to reach into my backpack and hand troubled teachers The Four Agreements. I kept repeating the agreements when our attendance system proves less than ideal (“Something else I have to learn all over again”) or when hear a dedicated teacher lamenting the new late work policy (“This is going to push me over the edge. Is there no accountability anymore for students?”).

So as I begin my work with students this 2016-2017 school year and also am transitioning my own family back to school, I have made a promise to remember and implement the universal ideas of Ruiz’s even more. Here they are:

If new and experienced teachers (really all people)  could speaking honestly and clearly without the intent to hurt, avoid assumptions, focus on students or other people and not themselves, and whether sick or tired always do their personal best, I think the school year would be off to a great start.

I would like to add one more agreement to the list. So here’s my plus one: listen more and talk less. I am an extravert and a verbal processor and keeping my mouth shut this is really hard; however,  I find  I can be more informed, understand more, empathize more deeply, and do better if I just resist the urge to speak.

As I read the four timeless ideas above I see a guide to support a teacher’s professionalism and a way to get through the often challenging and sticky moments presented to a teach every day.  I hope all teachers can find a little gem of wisdom and hope from this little gem of a book. Happy 2016-2017 teacher-friends!

Veronica Iacobazzo is a an 11th-grade English teacher in State College and is the Co-director of Penn State’s Professional Development School where she supervises yearlong English interns. She loves the serious and frivolous in all things related to books, television, fashion and pop culture. Follow her on her fledgling Twitter account @viacobazzo.

Friday Five: The Four Agreements (+ One)

Homegoing by Yaa Gyasi rises to the top of my books read this year, and discovering that it was a first novel by this author makes me love it even a little more. This epic story stretches through history, from Ghana in times where some Asante and Fante people were taken as slaves to modern day California.  The story focuses on two people each generation–the offspring of half-sisters Effia and Esi, both born to the same mother, but separated by paternity, distance, and circumstance. Each generation looks at a descendant of each woman.

While I thought it might be disruptive not to follow one character or two characters, the way Gyasi wove the family history into each chapter didn’t make me feel as if I missed the other characters, as they were mentioned in each subsequent chapters. Seeing the spectrum of possibilities for people born in the same time period was fascinating, and Gyasi clearly did her research. I found myself wrapped up in history, celebrating victories and mourning losses as if I were there with her.  There’s insight on every page of the novel.  Whether she’s commenting on how people do not closely examine their lives: “It was the way most people lived their lives,on upper levels, not stopping to peer beneath” or whether the medicine woman was explaining how people worked:  “People think they come to me for advice…but really, they come to me for permission,” I found the story compelling and easy to sink into. I read this book in just one day.

I could see pairing parts of this book with Ta-Nehisi Coates’s book Between the World and Me or even as a companion to Chinua Achebe’s Things Fall Apart. When I used to teach Things Fall Apart, I would refer to the proverb “where one thing stands, another stands beside it” and I was reminded of it by this line in Homegoing:  “The need to call this thing “good” and this thing “bad,” this thing “white” and this thing “black,” was an impulse that Effia did not understand. In her village, everything was everything. Everything bore the weight of everything else.”

Speaking of other texts this book made me think of, Chimamanda Adichie’s TED talk “The Danger of a Single Story” could also be paired with this, as she talks about one way to steal power is to start with secondly. I remembered that when I read this line from Homegoing: “We believe the one who has power. He is the one who gets to write the story. So when you study history you must ask yourself, Whose story am I missing?, Whose voice was suppressed so that this voice could come forth? Once you have figured that out, you must find that story too. From there you get a clearer, yet still imperfect, picture.”

This entire book was beautifully written and empowering. Lines like this are hard to resist writing down and/or underlining: “You want to know what weakness is? Weakness is treating someone as though they belong to you. Strength is knowing that everyone belongs to themselves.” What I loved best, though, was the hopeful ending to the novel. It ends with love and joy and a feeling of satisfaction and completeness as well as hope. So, if you need a literary read that will kidnap you for a few hours but will stay with you for a few weeks, check this out.

Up Late with Homegoing

I don’t usually make New Year’s resolutions, but this year I resolve to balance my reading and my writing. In past years, I’ve made reading a priority, setting my Goodreads challenge at 75 or even 100 books for the year. This year, I’ve decided to make a moderate challenge for myself in the reading area so I can balance that out by doing more writing–poetry, professional writing, personal writing, and even some fiction.

One of the motivators for me was a recent tweet from the Boston Globe citing the likelihood of winning powerball (1 in 292 million) versus the likelihood of writing a NYT bestseller (1 in 221). I don’t need to write a bestseller, thank you very much, I’d just like to write something a few other people want to read.

So here’s to a new year filled with plenty of reading and writing opportunities! 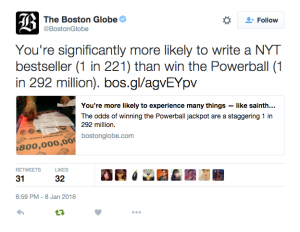 This summer I discovered the Pinterest Button for Chrome, which allows you to organize pictures and websites on different boards (subjects) for later perusal.  I’ve really appreciated having this to snag something and place it somewhere out of the way until I’m ready to peruse it.

There are so many new elements of social media sometimes it can be hard to keep up. I try to learn a new type of technology at least once a semester. This semester, I ventured into the world of snapchat. You may have a false notion of what Snapchat is, because I sure did…no longer is it for illicit photos that disappear after a few seconds.  Now, Snapchat can connect you to a community through stories and connect you to friends via images.

As someone who believes in purging, Snapchat appeals to me.  I can see a cute photo of you and your dog that you shared with me and then it disappears.  I can take a picture of my garden, and put it on my story, and then, after 24 hours, it disappears. Basically, there are 3 ways to use snapchat: to share an image with one person, to share an image with your friends by putting it on your story, and to view larger community stories (for example, recently there was a Kentucky Derby story you could view).  I live near Penn State, so I can see the Penn State story, which often has cultural events, sports images, and cute pictures of ducklings crossing the street. (It also has time stamped images of students studying into the wee hours of the night).

Here are a few things about Snapchat I learned:

Tech Thoughts: A Guide to Snapchat for Teachers

A few weeks ago my husband and I took a trip to the Folger Shakespeare Library in Washington D.C. The library was featuring an exhibit called Decoding the Renaissance – 500 Years of Codes and Ciphers. Being a total Renaissance/Shakespeare nerd, I HAD to visit. Despite the frigid temperatures in D.C. that Sunday (it was that day with a negative 12 degree wind chill), we had an amazing time. Although I could give over a dozen reasons to visit the Library, I’ve listed my top 5 below! 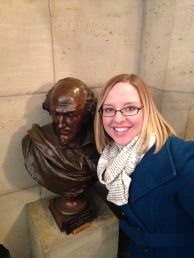 1. I won’t have to worry about 2 hour delays or cancellations–I can plan my day without thinking about the weather.
2. My high school students apparently no longer know how to read directions or listen to them, and if I have to repeat myself one more time, I may flip a table.
3. I would like sleep without an interrupt of an alarm. If I am up early, it will be because I chose to be awake and out of bed, not because a jarring electronic noise pestered me.
4. I want to watch some of the Oscar-winner movies, like Birdman, and not feel guilty that I should be grading.
5. Although we only have 2 days off, I plan to not plan anything for those two days and there is something delightfully indulgent about a day with no plans or grading or errands to complete. 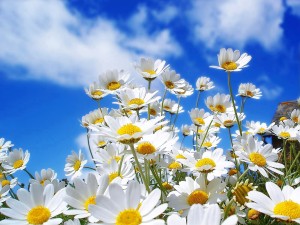