Tone is always difficult to talk about with students. First, we have to convince them the poem *has* a tone. Then, we have to ask them to give us words to describe the tone. Finally, we try to have them point to the word(s) in the poem that made them understand the tone.

Here are two poems about the same topic, which might allow those conversations to go a little smoother. By comparing the two poems, the tone of each might more easily come to light.

Just a note, I give my students a list of tone words at the beginning of the year, and it makes it much easier for these conversations at first if they can reference a list rather than have to generate tone words on their own.

Still,
I would leap too
Into the light,
If I had the chance.
It is everything, the wet green stalk of the field
On the other side of the road.
They crouch there, too, faltering in terror
And take strange wing. Many
Of the dead never moved, but many
Of the dead are alive forever in the split second
Auto headlights more sudden
Than their drivers know.
The drivers burrow backward into dank pools
Where nothing begets
Nothing.

Across the road, tadpoles are dancing
On the quarter thumbnail
Of the moon. They can’t see,
Not yet.

The old man
must have stopped our car
two dozen times to climb out
and gather into his hands
the small toads blinded
by our lights and leaping,
live drops of rain.

The rain was falling,
a mist about his white hair
and I kept saying
you can’t save them all
accept it, get back in
we’ve got places to go.

But, leathery hands full
of wet brown life
knee deep in the summer
roadside grass
he just smiled and said
they have places to go
too.

Talking about Tone with Two Poems

Here’s a series of poems I like to use in class before we talk about punctuation (an oft-ignored topic in essay writing). I give my students the haikus without their titles, and then ask them to figure out what punctuation mark each haiku is about. Then, I ask them to write a haiku about one of their favorite punctuation marks.  Then, we discuss punctuation in writing, and how the use of punctuation can impact meaning.

The Hyphen
Had you a whole line
of them you’d have your own train.
Imagine the freight.

The Colon
Eyes of a dead man
lying on his side, looking
into a bright light.

The Comma
Ah, giant embryo
with tail, what say you—yin or
yang, you little shrimp.

The Semicolon
A Spanish peanut,
a cashew—which’s the best fit
for the appendix?

The Question Mark
Eerie character—
he whose lobe of an artist’s
left ear is severed.

The Exclamation Point
Dah-dit. A signal
in Morse code turned on end: N,
you must solve for it.

The Period
How we’ve come to draw
with such sheer economy
the perfect circle. 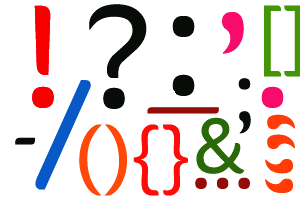 Posted by Kate, Blog Editor and Book Reviewer for PCTELA

A Sonnet that doubles as an Ode. I love to teach this poem to my students. They enjoy unpacking the metaphors and they also enjoy talking about the topic.

You do not come dramatically, with dragons
That rear up with my life between their paws
And dash me butchered down beside the wagons,
The horses panicking; nor as a clause
Clearly set out to warn what can be lost,
What out-of-pocket charges must be borne
Expenses met; nor as a draughty ghost
That’s seen, some mornings, running down a lawn.

It is these sunless afternoons, I find
Install you at my elbow like a bore
The chestnut trees are caked with silence. I’m
Aware the days pass quicker than before,
Smell staler too. And once they fall behind
They look like ruin. You have been here some time.

A Sonnet for Your Sunday: “To Failure” by Philip Larkin

Autumn Begins In Martins Ferry, Ohio
James Wright
In the Shreve High football stadium,
I think of Polacks nursing long beers in Tiltonsville,
And gray faces of Negroes in the blast furnace at Benwood,
And the ruptured night watchman of Wheeling Steel,
Dreaming of heroes.

All the proud fathers are ashamed to go home.
Their women cluck like starved pullets,
Dying for love.

Therefore,
Their sons grow suicidally beautiful
At the beginning of October,
And gallop terribly against each other’s bodies.

Matsuo Basho
Autumn moonlight–
a worm digs silently
into the chestnut.
Autumn Valentine
Dorothy Parker
In May my heart was breaking-
Oh, wide the wound, and deep!
And bitter it beat at waking,
And sore it split in sleep.

And when it came November,
I sought my heart, and sighed,
“Poor thing, do you remember?”
“What heart was that?” it cried.

Katherine Mansfield
Now’s the time when children’s noses
All become as red as roses
And the colour of their faces
Makes me think of orchard places
Where the juicy apples grow,
And tomatoes in a row.

And to-day the hardened sinner
Never could be late for dinner,
But will jump up to the table
Just as soon as he is able,
Ask for three times hot roast mutton–
Oh! the shocking little glutton.

Come then, find your ball and racket,
Pop into your winter jacket,
With the lovely bear-skin lining.
While the sun is brightly shining,
Let us run and play together
And just love the autumn weather.

Three Pieces on the Smoke of Autumn
Carl Sandburg
Smoke of autumn is on it all.
The streamers loosen and travel.
The red west is stopped with a gray haze.
They fill the ash trees, they wrap the oaks,
They make a long-tailed rider
In the pocket of the first, the earliest evening star.. . .
Three muskrats swim west on the Desplaines River.

There is a sheet of red ember glow on the river; it is dusk; and the muskrats one by one go on patrol routes west.

Around each slippery padding rat, a fan of ripples; in the silence of dusk a faint wash of ripples, the padding of the rats going west, in a dark and shivering river gold.

I lean on an ash and watch the lights fall, the red ember glow, and three muskrats swim west in a fan of ripples on a sheet of river gold.. . .
Better the blue silence and the gray west,
The autumn mist on the river,
And not any hate and not any love,
And not anything at all of the keen and the deep:
Only the peace of a dog head on a barn floor,
And the new corn shoveled in bushels
And the pumpkins brought from the corn rows,
Umber lights of the dark,
Umber lanterns of the loam dark.

Here a dog head dreams.
Not any hate, not any love.
Not anything but dreams.
Brother of dusk and umber.

Last summer, when I was preparing for my AP poetry unit, I found The Making of a Poem at the library. I ended up returning it and buying my own copy, I loved it so much. This book helped me structure my class for poetry using forms and it also introduced me to a lot of poems which I would now count as favorites.

The book is broken up into four parts: Verse Forms, Meter, Shaping Forms, and Open Forms. Each part is sectioned off into specifics, for example, Verse Forms covers the villanelle, the sestina, the pantoum, the sonnet, the ballad, blank verse, the heroic couplet, and the stanza. Within each segment, we are offer the form at a glance, the history of the form, and the contemporary context. Each segment also has a close-up of a particular poem, offering context on the author and the subject.

I found myself quoting Strand as I taught poetry–on the my overview and when I was offering advice to students on writing poems: “A poem is a place where the conditions of beyondness and withinness are made palpable, where to imagine is to feel what it is like to be.  It allows us to have the life we are denied because we are too busy living.  Even more paradoxically, a poem permits us to live in ourselves as if we were just out of reach of ourselves” (Strand xxiv). His ability to articulate the tension of poetry in our lives and our ability to use poetry to find ourselves appeals to me.

The end of the book also contains biographies of all the poets and information for further reading. If you could have just one book for reading and teaching poetry, this would be it. Unfortunately for the world, Mark Strand passed away last November, and I remember remarking to my students what a loss for the world his death was. Bring him back to life by reading this remarkable anthology he created.

Up Late with The Making of Poem by Mark Strand