There are four gifts Leonard Peacock must deliver to four very different people on his 18th birthday.

A check, a hat, a medal, and a necklace all symbolize Leonard’s place in the world as he says his final goodbye. This birthday is going to be the most memorable in all of Leonard’s 18 years because on this day he is going to murder his former best friend, Asher Beal, before he pulls the trigger on himself.

The novel uses an epistolary format along with journal type entries which replay the events which led Leonard to plan his ultimate demise where he will go down in history similar to those who have come before him: Ted Kaczynski, Timothy McVay, and then the Columbine shooters Eric Harris and Dylan Klebold. This novel gives a different perspective of what it is like to unwind both mentally and emotionally.

I don’t think I can compare this novel to anything that has been written for teens in the past several years as Forgive Me, Leonard Peacock is truly in a class of its own. Matthew Quick emulates a similar pacing style as he did with Boy 21, complete with conversational, and controversial at times, dialogue which is in no way forced.

At 273 pages this novel was a suspenseful and fast read because soon after chapter one Leonard was in my head. I embraced this character so quickly because as a teacher I knew he was the much needed voice of this generation of misfits and vagrants refusing to embrace the formulated status quo of selfies and hashtags. Leonard needed saving in a way we all at times need saving when life takes an unexpected turn. At his breaking point Leonard finds himself struggling with two very different decisions he must make. In the end he does not solve his problems and he is far from fixed. But he does come to understand humanity.

A satisfying read, the ending is not only unexpected but formulated so beautifully that any reader can come close to finding one’s own meaning of what it is like to feel unimportant, forgotten, victimized, and then on the path to becoming whole again.

Forgive Me, Leonard Peacock is one that will stay with you for a while. Embrace the complexity of this character and you will learn what it is truly like to not just sympathize, but to empathize with those who are lost and forgotten in a complicated and twisted society. 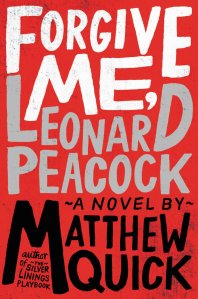 Up Late with Forgive Me, Leonard Peacock by Matthew Quick