Last year, one student was struggling to formulate her topic for her final synthesis essay (I ask students to use at least 4 texts and combine them in a larger argument about some element of being human).  She stayed after class one day and I asked her if she could somehow graph out what she wanted to say about making decisions.  We talked for almost an hour, and she drew a number of different iterations of a graph.  This was one of the final ones she designed, and it ended up in her paper: 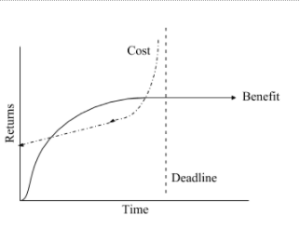 What adding this graph allowed her to do was then explain how it applied to each of the four books she analyzed.  It was a remarkable moment for both of us, as we both understood how the image allow her thinking to crystalize.

This year, as students began to draft synthesis essays, after they all thought they had solid topics, I asked them to draw an image that depicted their topic. It could be a spectrum, a graph, or some other kind of image.  For a few students, it served the same purpose as my student last year: it helped crystalize their thinking.

One student realized the more characters desired something, the more insane they seemed:

Another student made a gradient for what she termed “consumption,” and whether there was an obsessive element to the consumption. This helped her decide where to place different characters (like Hamlet, Ahab, or Frankenstein)  and allowed her to craft her essay around this concept.

Another student used a graph to show the different kinds of archetypal figures he saw in the texts we read.

While not every student used these graphs in their papers, at least 20% of them did find them useful enough to incorporate into their final paper. As a reader, I also found them useful to refer to as I read their arguments.

So the next time you ask students to write an essay, consider having them translate it into an image. The act might help clarify their thinking and improve their writing.

Posted by Kate, Blog Editor and Book Reviewer for PCTELA